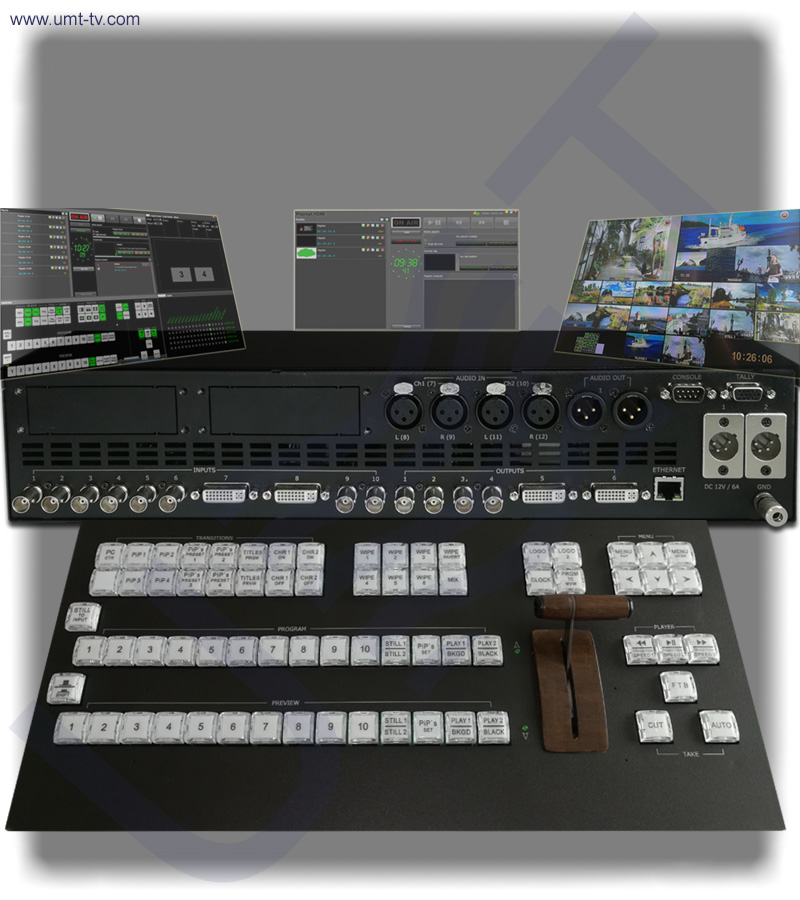 •Chroma Key
2 independent Chroma Key channels (with automatic preassigned settings). You do not have to do any extra adjustments, wasting your time!

•Titles
Titles are included into the video via HDMI inputs of mixer from PC and using Linear Key (Fill and Key) via SDI inputs.

•PiР (Picture-in-Picture)
It is possible to enable the PIP presets, which are combinations of up to 4 windows included in the background. 2 windows can have a full-screen size and 2 other windows can have a quarter screen size. The pictures can be moved, resized, repositioned, cropped and given color borders. It is possible to overlay the PiP presets and Titles simultaneously on the video output signal.

•Built-in LOGOs
2 independent Logos. 1 Logo can be dynamic. Total 8th logos can be uploaded into the video mixer nonvolatile memory from the PC and then assigned to independent buttons "Logo 1" and "Logo 2".

•Pattern Generators
BLACK, Color BARS and audio signal source (1kHz, 0dB) are operated as independent sources and have buttons on the Preview and Program lines of the control panel.

•Control Panel
Performs the following functions: direct access to every external and internal source of the video mixer forming a signal for the air (including Menu Control, multi-purpose buttons and T-Bar).

Taking into consideration that we (UMT LLC) are developer and system integrator, also do not stop on our technical growth and improvement, know that view of all our devices and equipment including their technical parameters may be different from pictures presented on website and parameters listed on each device webpage.
Note! All details customer has to confirm in advance during ordering and before payment. Those parameters that were not specified and / or were not agreed while ordering will be implemented as basic at the discretion of the manufacturer. Each our customer has 1.5 year warranty and 7 year aftersales support for whole range of our products.